Our research is conducted at the interface between chemistry and biology. Our ultimate aim is to understand and explore the chemistry of nature and and natural processes that can be useful for drug discovery. In particular we explore the fundamentals of peptides with possible pharmaceutical and medical applications.

Peptides and proteins are produced in all living organisms to fulfill important biological functions. Hence one would think that they would constitute one of the most common types of drug substances. However, the use of peptides and proteins is hampered becasue of their lack of stability.

We have found that some plants produce a cocktail of very unusual polypeptides that are head-to-tail-cyclized via amide bonds. These cyclic polypeptides, known as cyclotides (cyclo-peptides), are around 30 amino acid residues long and show an exceptional chemical and biological stability. This is partly explained by their cyclic backbone, but in addition they contain six conserved cysteine residues that are involved in three disulfide bonds. Together these features confine the so called cyclic cystine knot motif (CCK), as shown in the figure below.

The central core of the cyclotides consists of three disulfides, marked in yellow and represented in "stick and ball" mode in the figure below. The disulfide bonds to the left and to the right and their connecting backbone (marked in grey) form a ring through which the third disulfide bond is threaded. This is the cystine knot, which together with the cyclic backbone defines the cyclic cystine knot motif. 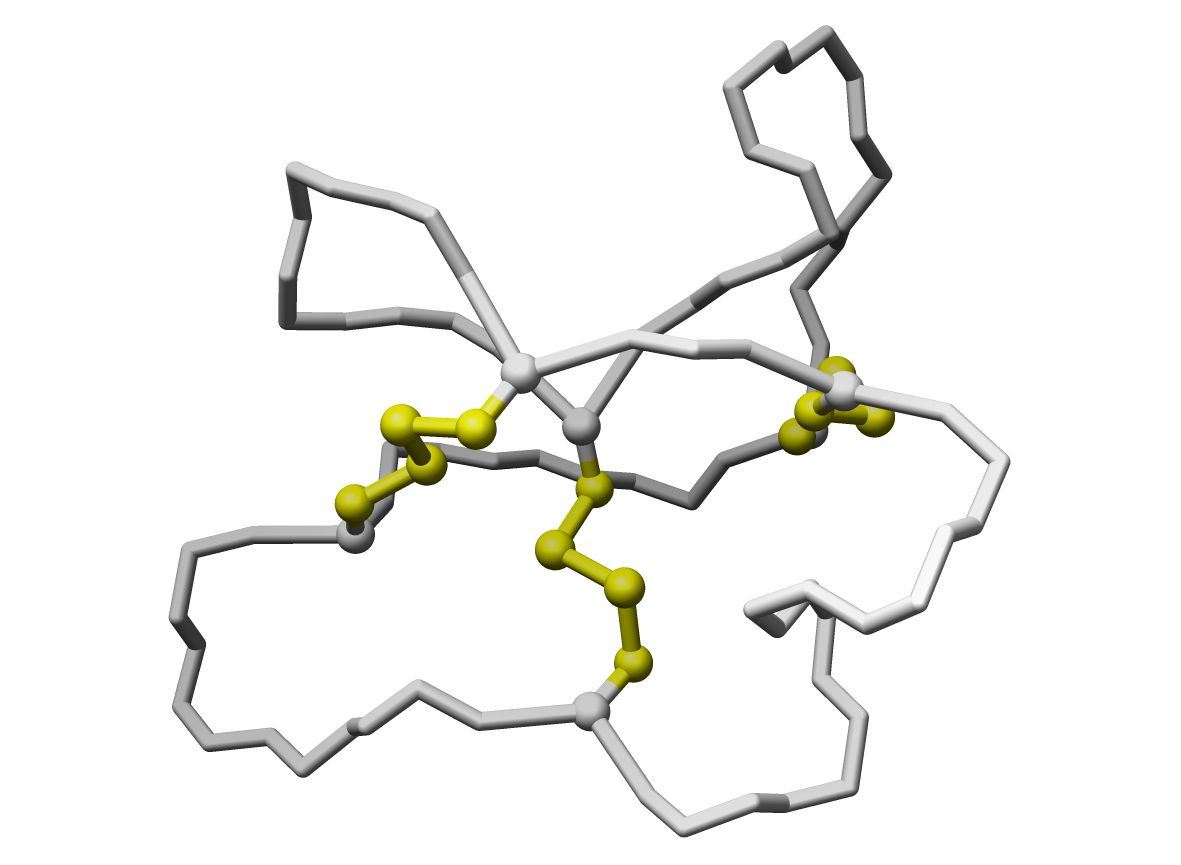 Biologically active peptide sequences can be succesfully be inserted into the stable cyclotide scaffold. Native cyclotides also show a variety of biological activities, such as contraction of the uterus (which was why the first cyclotide kalata B1 was discovered), and anti-HIV and insecticidal activity.

We have recently shown that they also have potent cytotoxic and antibacterial effects, which is currently followed up by structure activity studies and studies of cyclotides effect on artifical cell membranes in the form of liposomes.

For more information, including the possibilities to do student projects in our group, please follow the links to the left or contact Ulf Göransson. You can also find more information about cyclotides in particular in Cybase, a database dedicated to cyclic proteins, and cystine knotted peptides in general in The Knottin database.

READ MORE ABOUT OUR RESEARC