Imaging Mass Spectrometry and Peptidomics in Neurodegenerative Disorders and Drug Discovery. Our research group focus on new approaches in mass spectrometry (MS), i.e. matrix-assisted laser desorption ionization (MALDI) imaging MS of biological tissue sections, and peptidomics, the comprehensive study of endogenous peptides.
Imaging mass spectrometry (IMS) a novel technique used to determine the spatial distribution of peptides, proteins, drugs and metabolites in biological tissue sections in situ. The technology allows analysis and visualization of endogenous proteins and peptides as well as drugs and its metabolites, in their native biochemical states within the same tissue section with high molecular specificity. Molecular images are created by rasterizing over the sample while collecting MS or tandem MS (MS/MS) spectra from every position at a chosen resolution. The localization pattern from individual molecular species present on the tissue surface can then be extracted and positioned on the original histological image with the abundances represented by a concentration dependent color scale.
Peptidomics involves the comprehensive analysis of the endogenous peptide content of a certain cell, organ, body fluid, or organism. It complements molecular biology approaches in its ability to characterize the processing of translation products, including changes in expression or posttranslational modifications (PTMs) of peptides and small proteins. By comparing the proteins and peptides in samples of diseased tissue with those in normal tissue, differential expression patterns can be detected that may lead to the identification of novel biomarkers.
The objective of our research is to utilize IMS and peptidomics approaches to study neurochemical processes in Parkinson’s disease (PD) and specifically L-Dopa-induced dyskinesias (LID). The aims is to define neuropeptides and proteins that are differentially expressed in the basal ganglia complex of animals with striatal dopamine depletions, and to determine which of these proteins are regulated by loss of dopamine signaling, as well as to investigate protein and peptide expression patterns in subjects with and without LID symptoms.
Understanding the relationship between pharmacokinetics and pharmacodynamics is crucial in the development of effective drug therapies. Current technologies only provide information on the total amount of drug in the whole tissue with no possibility to address micro-environmental localization of the compound or metabolic derivatives. The application of imaging mass spectrometry in drug discovery studies would provide a new tool to accurately measure local tissue concentrations of drug/drug metabolite in context with efficacy achieved with the targeted biology or in the context of safety. Such technology could provide new and important information.
Our laboratory is equipped with the latest separation and MS technologies (4 capillary nanoLC instruments, two Q-Tof mass spectrometers, one LTQ mass spectrometer. In addition, K&A Wallenberg Foundation has recently funded two MALDI mass spectrometers (AutoFlex III MALDI TOF MS and UltraFlex II MALDI TOF-TOF MSMS, Bruker), specifically for the imaging mass spectrometry applications. 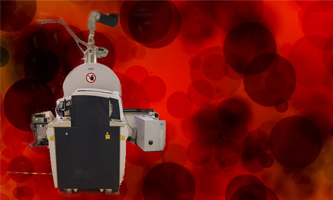 READ MORE ABOUT OUR RESEARCH