When testing the potential genotoxicity of pharmaceuticals and other chemicals, the test systems are generally based on experimental animals, bacteria or various kinds of transformed cells. In our studies we have focused on two different end-points: DNA strand breaks

using the so-called Comet assay, and chromosomal damage using the cytochalasin-based version of the micronucleus assay in different types of cell cultures. Our major objective is to improve the risk assessment regarding human exposures to genotoxic agents.

When it comes to risk assessment of genotoxic agents, it is important to differ between genotoxic carcinogens and other substances that increase the risk of cancer by other mechanisms. In the case of drug-induced oxidative DNA-changes, for instance, one can distinguish two main groups of substances: those who cause various types of reactive oxygen radicals in the cells directly, and those who cause oxidative stress indirectly as a consequence of general cytotoxicity. The research of recent years has also shown that the DNA repair has a great impact on whether the DNA- and/or chromosomal damage is manifested as a mutation or not, and there is reason to believe that there is a great variation in individual sensitivity to genotoxic agents, due to individual differences in DNA repair, metabolic bioactivation/detoxification pattern and/or other defense mechanisms in the cells. All those aspects have been, and are, studied in this project. 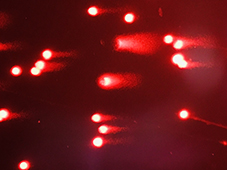 A major focus for us today is to further improve the protocol for the Comet assay. Our aim is then to reduce the intra- and inter-assay variability, improve the data handling and statistical analysis of comet data, and transfer the technique to a platform making it possible to do high-throughput experiments – for example when studying the potential DNA-damaging effects of extracts, fractions or pure compounds isolated from traditionally used medicinal plants.